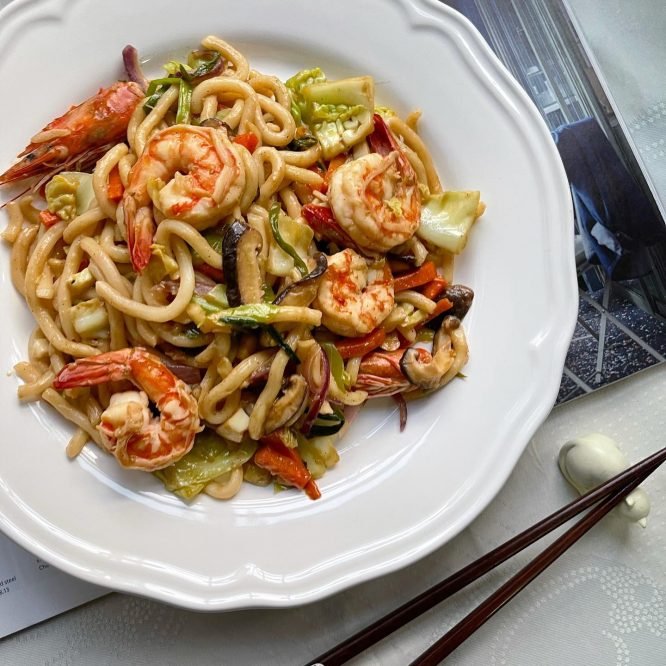 Udon is a thick noodle made from wheat flour, used in Japanese cuisine. It is a comfort food for many Japanese people. There are a variety of ways it is prepared and served. Its simplest form is in a hot soup as kake udon with a mild broth called kakejiru made from dashi, soy sauce, and mirin

Once upon an Udon…

There are many stories explaining the origin of udon.

One story says that in AD 1241, Enni, a Rinzai monk, introduced flour milling technology from Song China to Japan. Floured crops were then made into noodles such as udon, soba, and pancakes in Japan which were eaten by locals. Milling techniques were spread around the country.

Another story states that during the Nara period, a Japanese envoy to Tang Dynasty China was introduced to 14 different kinds of food. One of them was called sakubei, which was listed as muginawa in Shinsen Jikyō, a dictionary which was published in the Heian Era. The muginawa is believed to be an origin for many kinds of Japanese noodles. However, the muginawa in Shinsen Jikyō was made with wheat and rice flour.

Another story for udon claims that the original name of the noodle was konton, which was made with wheat flour and sweet fillings.[citation needed] Yet another story says that a Buddhist priest called Kūkai introduced udon noodles to Shikoku during the Heian Era. Kūkai, the Buddhist priest, traveled to Tang Dynasty China around the beginning of the 9th century to study. Sanuki Province claimed to have been the first to adopt udon noodles from Kūkai. Hakata province claimed to have produced udon noodles based on Enni’s recipe.