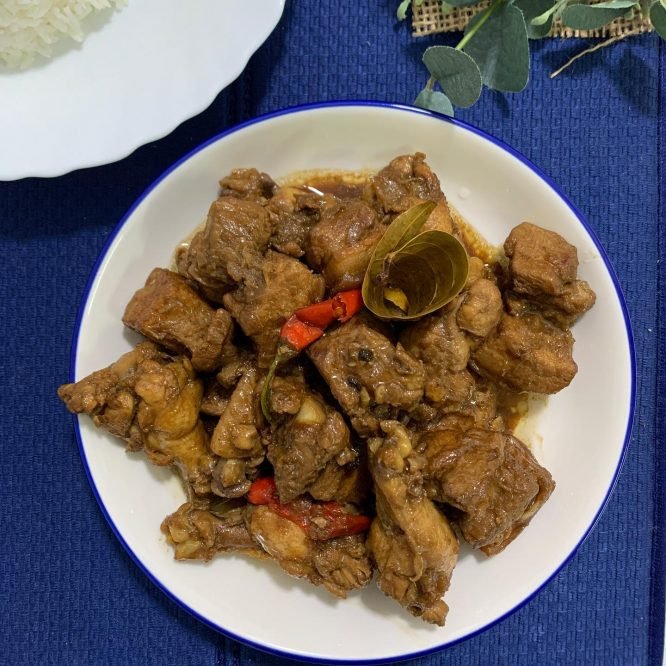 There are four main traditional cooking methods using vinegar that are still widely prevalent in the Philippines today: kinilaw (raw seafood in vinegar and spices), paksiw (a broth of meat with vinegar and spices), sangkutsa (pre-cooking meat by braising them in vinegar and spices), and finally adobo (a stew of vinegar, garlic, salt/soy sauce, and other spices). It is believed that paksiw, sangkutsa, and adobo were all derivations of kinilaw. They are also related to cooking techniques like sinigang and pinangat na isda that also have a sour broth, albeit using native fruits like calamansi, tamarind, unripe mangoes, bilimbi, santol, and star fruit instead of vinegar.

When the Spanish Empire colonized the Philippines in the late 16th century and early 17th century, they encountered the adobo cooking process. It was first recorded in the dictionary Vocabulario de la lengua tagala (1613) compiled by the Spanish Franciscan missionary Pedro de San Buenaventura. He referred to it as adobo de los naturales (“adobo of the native peoples”).

The Spanish also applied the term adobo to any native dish that was marinated before consumption. In the 1794 edition of Vocabulario de la lengua tagala, it was applied to quilauìn (kinilaw) a related but different dish which also primarily uses vinegar. In Vocabulario de la lengua Bisaya (1711), the term guinamus (verb form: gamus) was used to refer to any kind of marinades (adobo), from fish to pork. Other terms for precolonial adobo-like dishes among the Visayan peoples are dayok and danglusi. In modern Visayan, guinamos refers to an entirely different dish, bagoong. Dishes prepared with vinegar, garlic, salt (later soy sauce), and other spices eventually came to be known solely as adobo, with the original term for the dish now lost to history.